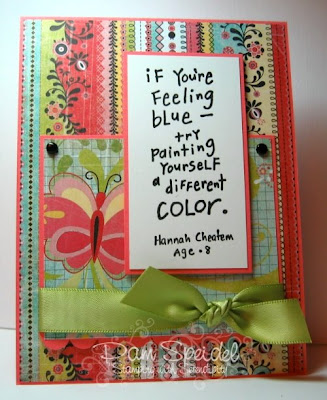 When I saw the colors in this week's Color Throwdown Challenge, I almost threw in the towel right there! You thought I was going to say I almost threw up right there, didn't you?! ha ha :) No, they aren't *that* bad together, but they are definitely colors that I wouldn't have thought to group together.

After seeing the cards the Throwdown Team created, I was truly inspired and decided I could use some background paper to "tone down" the colors a bit. :) I pulled out a sheet of cardstock for each one of the Stampin Up colors ~ cameo coral, tempting turqouise and kiwi kiss and then sorted through my designer papers to see if I had anything that would coordinate. The ones I selected are from the Basic Grey - Urban Prairie 6 x 6 pad. I debated which one of the cardstock colors to use as the base and decided on the cameo coral, using the kiwi kiss ribbon to accent it. The turquoise in the patterned paper is much more subtle than the tempting turquoise cardstock and that was ok with me! :) 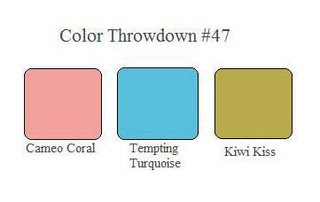 The stamp is one of my favs ~ by Inkadinkadoo! I've stamped it in Versafine onyx black ink and embossed with clear powder. Can you see the scalloped edge under the ribbon? That was created with the Stampin Up punch.

Well, I hope you like it and maybe I've even inspired U to create a card with these unlikely colors. What do you say? If I can do it, so can U! :)

Tomorrow is FRIDAY! YaY! I'm always ready for the weekend!

Quote for Today ~ {a repeat...worth repeating}

Maybe we should develop a Crayola bomb as our next secret weapon. A happiness weapon. A beauty bomb. And every time a crisis developed, we would launch one. It would explode high in the air - explode softly - and send thousands, millions, of little parachutes into the air. Floating down to earth - boxes of Crayolas. And we wouldn't go cheap, either - not little boxes of eight. Boxes of sixty-four, with the sharpener built right in. With silver and gold and copper, magenta and peach and lime, amber and umber and all the rest. And people would smile and get a little funny look on their faces and cover the world with imagination.
~Robert Fulghum
Posted by Pam Speidel at 9:30 PM

Pam, this is perfect! I love these little sentiments you have--I would say this is my favorite--and to have it paired with this beautiful BG paper is just so fun! Thanks for playing--glad you overcame the challenge!
LeAnne

Great job with this challenge! I love those sayings!

Great colours. Love the card and the sentiment is adorable. I think we should all remember that :)

Wonderful job! That paper is perfect and I love that sentiment! Thanks for playing the Throwdown! Hope to see you again next time!

Oooh, I love these cute "kid" sentiments and have begun collecting some of them. I think these colors are perfect with this stamp! What a fun, bright card! Another great one...

Yes, great minds think alike! We used the same papers!! I love that sentiment!! Thanks for playing along with us!

What an adorable card! I love that saying! and I really love your crayon quote today!

Cute card Pam! Great job with the challenge! I am a bit stumped for now with these colors myself. You put your card together very nicely! :) Hugs, Mona

I think you made these colors sing, Pam! Such a fun, happy card with a great sentiment, perfect for this challenge! :> (aka TiikkiStars @ the Shack)

This is adorable! I love that sweet quote and the pp is perfect! Great layout too! Thanks so much for playing the CTD!

Welcome to My Blog! 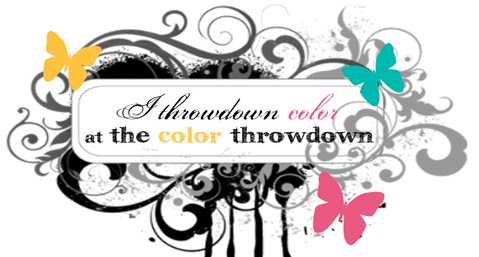 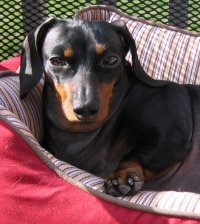 Enjoying the sunshine!
"Peace begins with a SMILE."
~ Mother Theresa